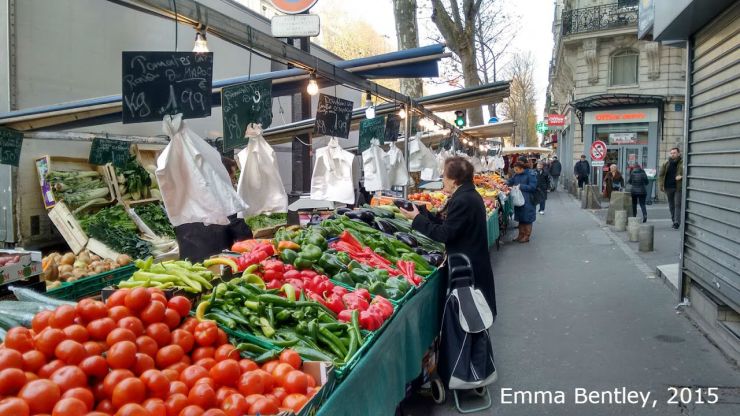 Well, yes, there’s a little old lady in the top photo but that’s not the answer.

And no, it’s got nothing to do with my love of endives that you can spot in the forefront of the bottom photo.

As of January 2016, you will not be able to get a plastic bag at the market.

As part of a wider movement already being implemented in supermarkets and chain stores designed to reduce wastage, plastic bags are being entirely phased out.

There seems to be some confusion about when exactly the ban will come into place and what exactly it will entail.

This is what we know:

Not content with banishing the thicker bags at the check-out, in October 2014, the Assemblée Nationale voted to get rid of the thin plastic bags found at fruit and vegetable counters. Billions are used (12 billion per year apparently¹) and then immediately thrown away each year.

The plastic bags are to be replaced by more eco-friendly versions, made of organic matter which are then supposed to be recycled in compost heaps. (However, I think I am the only person of this city of 2 million who does her own composting!² I would love to know how many other people would also be able to do this…)

It’s not even like you’ll be able to buy a bag for 5, 10 or 50 cents. Plastic bags are being completely done away with.

We’re going to start seeing more and more paper bags from now on. However, there is some resistance to these too, given that they also need to be recycled.

Where it starts getting complicated:

There are worries that paper bags are not as strong as their plastic counterparts. Have you ever tried putting a melon or pineapple in a paper bag?! Even a kilo of apples? We potentially stand to waste a lot more food should the bag rip.

There is also talk that this plastic bag measure will apply at the fish counter too. Let me just say, if there’s one thing that I’ll draw the line at…. I ain’t hauling any salmon straight over my shoulder!

Imagine you’re at your local Franprix or Carrefour. Instead of buying your fruit and vegetables loose, you will probably favour buying your vegetables in a pre-packed bag now because it will be easier than fishing around for a loose potato at the bottom of your handbag. Supermarkets are the biggest source of waste, both in terms of alimentary waste – which they’ve been told to crack down on – and packaging. Why are they not being told to sell more of their fresh produce en vrac / loose?

Anyway, rant over. What this all boils down to is: if you’re a local, don’t forget your caddie or shopping panier when you go to stock up on spuds. If you’re a short-termer or tourist in Paris, it may be a little bit harder but you’ll have to consecrate a tote bag or something similar for transporting your veggies.

The “Parisian market experience” will also irrevocably change. The days of “servez-vous, monsieur, madame, servez-vous!” will soon be behind us.

One thought on “To Market, To Market!”