As a nation, we have been glued to the news this weekend. Gleaning the media channels for any piece of information which would help make sense of what is utterly senseless.

129 people dead. 352 injured. One particular Twitter account (“@SOSParis1311” run by a 15 year old girl, no less) posts messages containing a smiling face and a desperate plea from their loved one.

The photos and messages on the #rechercheparis hashtag, searching for missing loved ones last seen near attack sites, are heart breaking

Another unexpected feature of this strange weekend is how we’re having to charge our phones at least twice a day due to the huge number of messages from friends, family and colleagues checking that we’re ok. The international outpouring is hugely supportive and reassuring and I thank you all for it.

The particular shock that I am feeling is the kind when you’ve just had a very near miss. These attacks hit at the heart of our community. I know two people who died in the attacks and many more who hear the echo of gun shots in the still of the night.

If you would like to read more about the demographics of the areas targeted in these attacks, I highly recommend the following article. 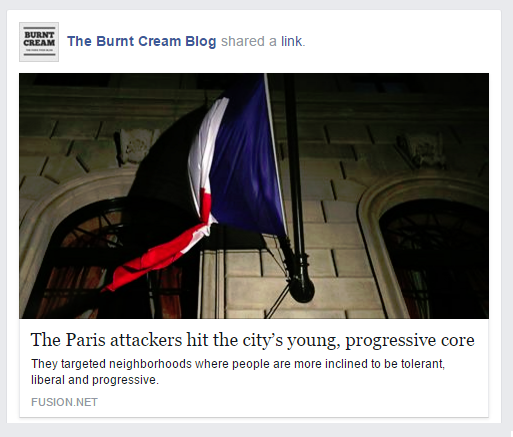 As a result, there were many people who didn’t leave their apartments on Saturday. Still reeling in shock, Paris was a ghost city.

Sunday, however, was a different story. Walking around boulevard Voltaire, place de la République and all along the canal this afternoon was an enormous number of people. Walking in silence, sitting and reflecting, showing solidarity.

As a community, we’re trying to understand why some of us should have been spared while others were so terribly unfortunate? How people barely out of their teens could shoot and kill innocents of their own age in cold blood. It was an outright attack on our culture and our lifestyle… and that doesn’t sit easily.

This blog post has no title because I can’t yet put into words what happened. I need a few days to come to terms with the shock, to grieve for my friends. I’m logging out of Facebook, turning off the television and I don’t want to read any more sensationalist articles about the who, what, where and why. 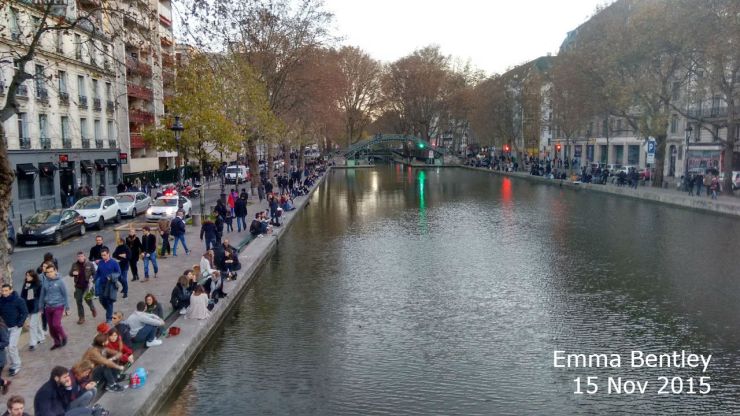 But yet, I wanted to write this blog post. I barely have enough time as it is to keep this blog up-to-date with my delicious discoveries but I wanted to put something out there in the blogosphere to support Paris. Something to balance out the fear and terror.

Paris is no more dangerous today than it was yesterday or the day before.

The western world has been living under the threat of terrorism for years. Fortunately this didn’t stop over 83 million tourists coming to France last year, making this beloved country the most visited in the world. Paris is no more dangerous today than it was yesterday or the day before. The main thing that has changed as a result of Friday evening’s attacks is our perception of safety and security.

I feel very strongly that these attacks should not make us live our lives any differently. They should not stop Parisians from living their every-day lives. We can still prendre l’apéro en terrasse. Equally, they should not stop tourists from coming to marvel at the Mona Lisa or chomp on aged Comté.

Turn off the news. Take a moment to appreciate the stilled silence. Then get up, get on and don't stop living life. #ParisAttacks

If anything, once the shock subsides, I reckon the feeling which will resonate longest will be the realisation that the world is not as safe a place as we thought. The terrorist network stretches far further than this small city of two million inhabitants. What we learnt this weekend is that Paris, despite being the revered city of lights, of culture, of romance and of bistronomy, is not exempt from being a target. Our lifestyle will most likely change as a consequence of these attacks – but, I hope, not to one of fear.

There are many quotes that seem appropriate at this particular moment. I’m seeing fluctuat nec mergitur (“shakes but doesn’t sink”) frequently, as it is this city’s Latin motto. However, the best reaction, in my opinion, to these attacks will be to adopt a carpe diem approach: don’t put off for tomorrow what you could do today.

So, here are some of my suggestions for carpe diem living:

Go to a music concert, because it’s far better than staying home afraid to go out.

Sit out on the terrasse of a café and enjoy the feeling of the warm sunshine / biting wind (delete as appropriate!) on your face as you sip that espresso / glass of wine (again, depending on the time of day.)

Tell your loved ones that you love them. Don’t turn down an opportunity to see a friend just because you’re too lazy to get out of your pyjamas and turn off Netflix.

Make an effort to support the city’s restaurants. Without wanting to sound callous, moments like these are actually great opportunities to get a table at the impossible addresses: Septime, Frenchie, Au Passage and the like. Many people will have cancelled so this is your moment to get in!

Nothing more to say. I’m logging off for a while, but I leave you with this video from Gail aka Perfectly Paris from Sunday afternoon:

Get up, stand up… Don't give up the fight #jesuisparis #notafraid

One thought on “There Is No Title.”