Have you ever wondered how the French celebrate Easter and where you can get really good chocolate in Paris? Read on.

Mardi Gras (literally “Fat Tuesday” but more commonly known as “Shrove Tuesday”) is one of my favourite moments in the foodie year – a day centred around pancakes, beignets… tout est permis and the fattier the better! Using up the store cupboard basics before Ash Wednesday signals the first of the 40 days of fasting.

If you happened to be walking past the Sacre Coeur or Notre Dame last weekend, you may have seen larger-than-usual crowds holding branches, a sure-to-be-sure sign that it’s Palm Sunday.

As French tradition dictates, from Maundy Thursday the church bells are silent (legend says they fly off to Rome to visit the Pope…) and will not ring until Easter Sunday morning to announce that Christ has risen.

As with most (if not all) causes for celebration in France, family-centered meals play a key role. Typically in France, on Easter Sunday after the Church service, you’d go home to a delicious meal of roast lamb. Obviously, with France’s new generation being less observant, the religious side of things has taken a step down in recent years. Nevertheless, for people of my age, colleagues etc, it’s an opportunity to get out of the city for a few days. “Tu fais quoi pour le weekend de Paques?” is the hot subject around the lunch table recently.

One of the traditions which is not showing any signs of dying away is the importance of chocolate. The supermarkets get in on the game with the industrially-produced Easter eggs made of vegetable fats, shea nut and palm oil subsitutes that are of far lesser quality than the really good stuff. (As a complete aside, if anyone wants to get really geeky about the controversy of chocolate production, labelling and the free movement of goods in Europe, try googling “EU Directive 73/241/EEC.”) 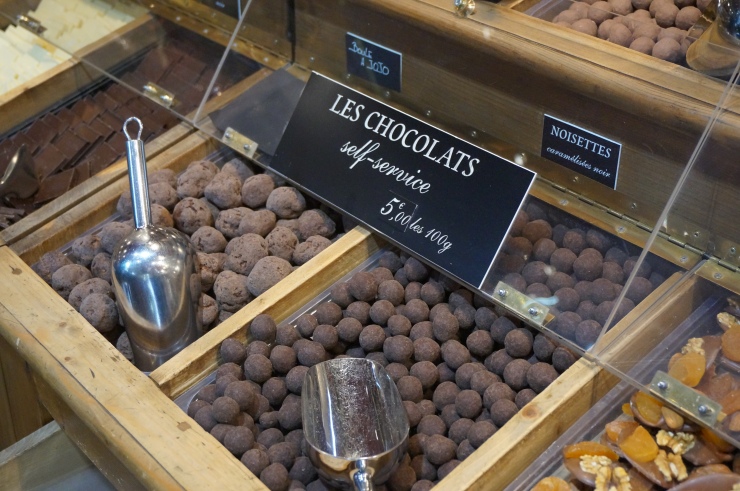 Belgian and Swiss chocolates are globally more renowned than their French counterparts… but that’s not to say that there isn’t great chocolate in Paris.

Walk straight on past your local Franprix – here are my top picks for artisanal chocolate:

Mococha, 89 rue Mouffetard, 75005 – a tiny little shop that would be easy to walk past if it didn’t have written on the window the fact that have chocolates from award-winning artisanal producers.

There’s actually an Easter Parade on Good Friday, starting at the Paroisse Saint Medard. Meeting at 12 noon, a lively group of worshippers will be singing their way up the rue Mouffetard, finishing at the Saint Etienne du Mont church around 13h30. More info here.

Patrick Roger, 108 boulevard Saint Germain, 75006 – which deserves its place in this list for the originality of its Easter animals – who wouldn’t want a chocolate pig??

Un Dimanche a Paris, 8 Cour de Commerces Saint Andre, 75006 – rather touristy but it is an incontournable for chocolate in Paris in my book. (Lots of chocolate rabbits and chicks this year.)

Georges Larnicol, 132 boulevard Saint Germain, 75006 – even more touristy, but it’s open late in the evenings so worth having in mind for last minute emergencies.

Hugo & Victor, 40 boulevard Raspail 75007 – I love the inventive chocolate-and-alcohol pairings for which this fairly recent newcomer to the chocolate scene is most known.

Why is the left-bank so spoilt for choice?