It’s not very often that I start a blog post with an open-ended question, but I hope you will see past this provocative literary device just this once and not think any less of me.

The question is a simple one: in order to guarantee quality, should a master craftsman who has obtained the highest recognition (an MOF, for example) have some sort of restriction on increasing his/her business to a size that is no longer artisanal?

We already have more than enough barriers and hurdles for companies in France; my gut feeling is reluctant. But when a MOF has more stores than I have fingers and toes and they are spread out in the four corners of the world, how can they keep that same quality that they once had?

Let’s take Ladurée as an example. It is, quand-meme, probably the best known macaron producer the world over. I would even go as far as to say that their little mint-green coloured box, embossed with the belle époque silver detailling, has become emblematic of the Parisian macaron. (I hope whoever designed their marketing strategy took home a huge bonus.)

However, once you know that Ladurée is now present in every continent apart from Antartica, you start to wonder how they can guarantee that the quality of the macarons sold in Australia for example is going to be of the same standard as those sold on the Champs Elysées? If I were also to tell you that all the Ladurée macarons sold the world over were made on the same production line and then frozen during transport… that hands-on, artisanal touch no longer feels quite the same to me.

Now what if I were to tell you that this same (industrial-sized) assembly line also made the macarons that are served in MacDonalds…?

It’s not my place to judge.. but I do want to point out these little-known facts and let you make up your own opinion. 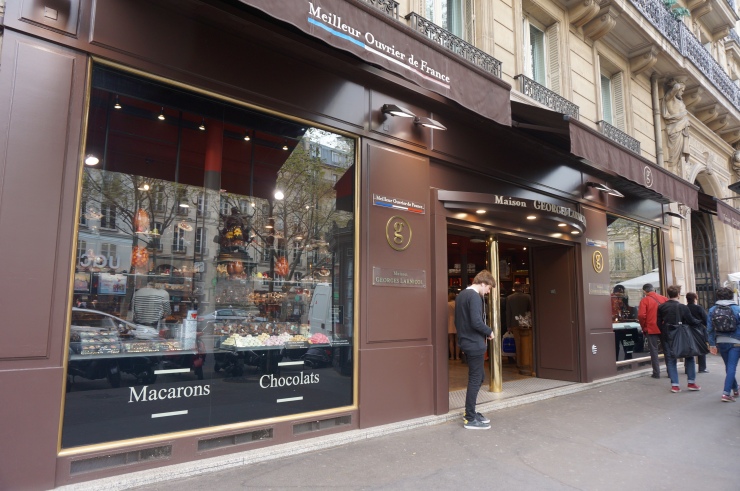 I have often overlooked Georges Larnicol because I judged the quality on the basis of the flagship store’s location the boulevard Saint Germain. I had also passed the shop on the rue Steinkerque (Paris 9) and caught myself muttering “tourist trap…” A quick google search reveals that there are 30-odd Larnicol shops in total and I’ve heard rumours that they’re planning to open an outlet in London in the very immediate future.

The quirky chocolates sculptures are the most eye-catching element from the street level. Yet Google, ever omniscient, confirmed what I had previously suspected – that Georges Larnicol received his MOF title for a Kouign Amann, a delicious caramelised buttery cake from Brittany. (See David Lebovitz’s recipe and explanation here and here.) 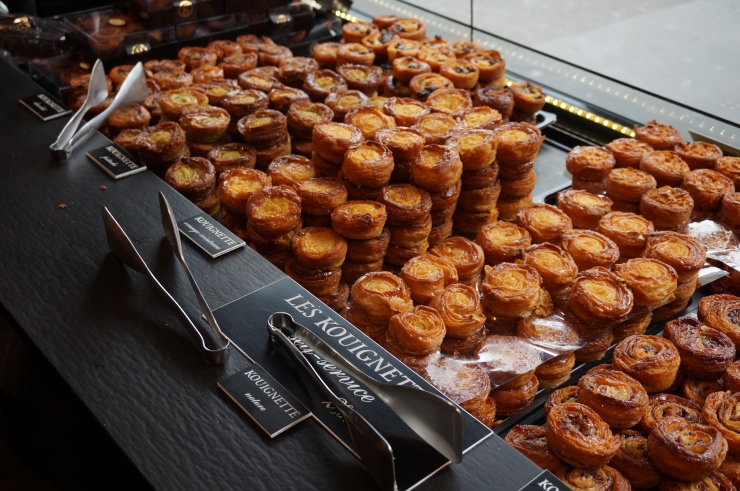 Available in many flavours: raspberry, pistachio, chocolate, lemon and salted butter caramel, my favourite is the plain, bog-standard variety and there is no denying that his kouignettes are very, very good. Despite my hesitations around its production, this is probably the best kouign amann I have had in Paris to date, actually.

However, that being said, how many times in your life can you exclaim “Gosh, do you know how much I would simply love a kouign amann right now!” without coming across as the most pretentious person in all of the western world?

Actually, the main reason why I have this address in my little black book is for its opening hours. Where else can you count on for being open when you have an after-dinner stroll? A place which can instantly prompt a look of sheer delight in any visiting friends when everything else is closed? As long as you’re aware that others (e.g. Gregory Renard and Arnaud Larher) offer better quality, your conscience shouldn’t feel heavy if you nip into Larnicol out of convenience. It’s still better than Franprix!

N.B. The kouign amann benefits from a quick blast in the oven to slightly soften the caramel (and avoid any unexpected trips to the dentist!) so it’s not the best choice to eat on the hoof. If you’re looking for something to eat straight away, go for the seaweed (algue) biscuits or a couple of chocolates instead.